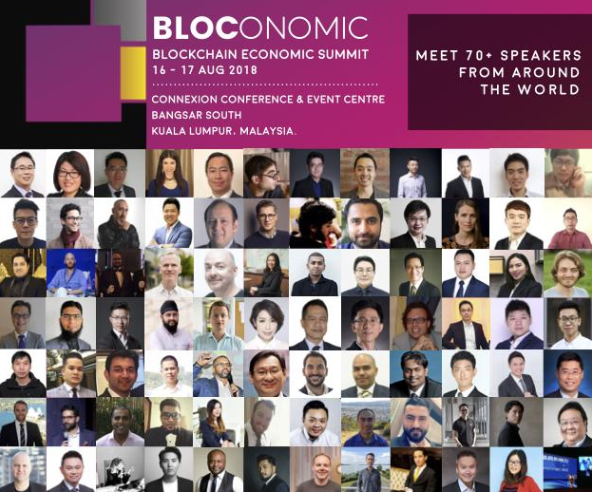 Bloconomic 2018 (Blockchain Economic Summit) started on 16th August in Kuala Lumpur, Malaysia. It was one of its kind which had successfully attracted over 80 international speakers, over 100 media partners with closed to 3,000 participants including speakers, experts, legislators, blockchain associations and community from over 30 countries.

Despite the sluggish cryptocurrency price right before the summit, it didn’t seem to affect the enthusiasm that the participants had towards the technology as they managed to see the use of blockchain beyond cryptocurrency itself. Reputable blockchain experts, digital asset management elites, and even professionals and banking executive themselves shared their experience, discussed the current and future development of blockchain economy.

The summit focuses on blockchain fundamental applications such as legislations around the world, eKYC, advertisement technology, AI, Big Data and asset tokenization, without any cryptocurrency speculation discussion taking place.

Despite being its first year organizing the summit, Bloconomic 2018 had managed to attract many top international blockchain companies to showcase their projects here in the heart of Kuala Lumpur. Exhibitors from China, Singapore, South Korea, Australia, South America, Italy, United States, Kazakhstan, Japan, Taiwan, Hong Kong and Malaysia itself received overwhelming responses from the participants and media alike.

Key highlights of the day:

The summit also set up three exciting symposiums on the theme of “Blockchain application in the United States, Germany, Thailand and Malaysia”, “Striving a balance between privacy and accountability on post-quantum blockchain” and “How to spot good blockchain projects from the bad”.

Invited guests experienced a wonderful debate and discussion on the three major themes, each with their own opinions, to stimulate the creativity and passion of blockchain application.

Another major theme of the summit was the showcase of innovative projects that tested and has successfully implement blockchain technology. For example, global game chain GGC in the gaming industry.

GGC Malaysia and Singapore partner, Adam Tan, delivered a wonderful speech on “Why traditional entrepreneurs will embrace digital currency”, which resonate many guests.

Aenco Co-founder, Darren Lui shared « How to use HealthTech, the new finance and blockchain solution platform to incubate the next unicorn. »

Day 1 of the summit ended with a speech delivered by CryptoBLK CEO, Dr. Duncan Wong, who talked about “Striving a balance between privacy and accountability on post-quantum blockchain”, which received warm applauds from the audience.

« Before Bloconomic, I thought blockchain is only smart contract and bitcoin but today we had an eye opening experience with other blockchain for example, we did not know halal chain can have so many applications. » – Student of Asia pacific university